Last year, AustinPolitics.NET power user Julio Gonzalez crafted this nifty chart that explains the different points of view on development that exist in Austin, the nation and the world. 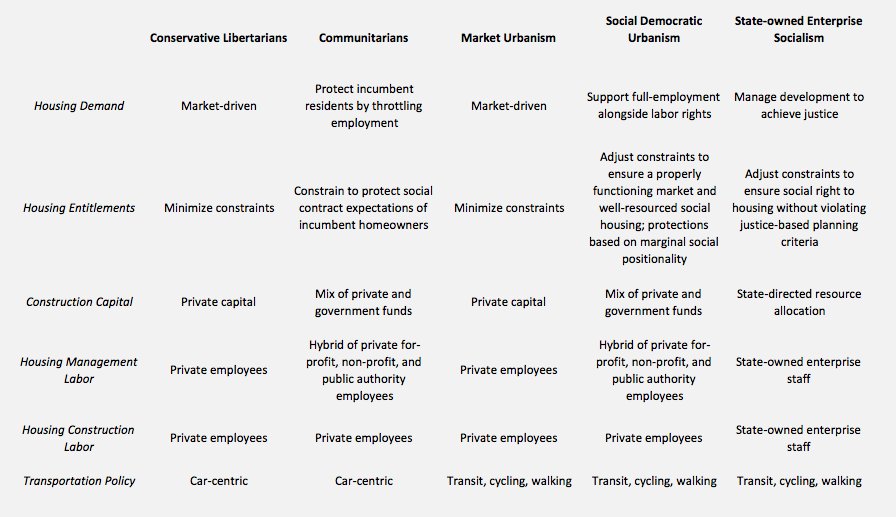 If you don’t understand Julio’s jargon, that’s what I’m here for. Let me explain.

The conservative libertarians are basically Republicans, in the mold of former Council members Don Zimmerman and Ellen Troxclair. They don’t think the city should put in place a lot of land use regulations, but they also tend to be culturally aligned with suburbia and would prefer the government spend money on roads than public transit.

Communitarians are basically the neighborhood association folks. When they buy a home, they are not only buying a piece of property, but they are buying a certain experience (the noise level, surrounding population, traffic) that government has an obligation to protect. Their main focus is preserving the status quo, which is of course car-dependent.

Market urbanists are basically libertarians who believe that, if their tax dollars must be invested for transportation, it would be better spent on public transit/sidewalks/bike lanes than roads. However, they want that public transit to be as cost-effective as possible, so they’re unlikely to support transit investments that require a major subsidy simply due to economic justice or environmental concerns. They believe that reducing land use regulations will lower housing prices and facilitate public transit, reducing the cost of living for everyone. However, they’re unsympathetic to government intervention in the form of subsidized housing or inclusionary zoning.

Social democratic urbanism describes the prevailing philosophy in Austin’s liberal politics and on City Council. Basically, they believe the market can play an important role in reducing housing costs and facilitating transit, but they also believe the market can’t do everything, which is why they support subsidies for low-income housing.

State-owned enterprise socialism. That’s pretty self-explanatory and, despite the assurances from a few loud voices about the impending uprising of the peasantry, is irrelevant to Austin politics.

Just the other day Julio crafted another chart with a new column: Leftist Suburbanism. Those folks are the same as the socialists except that their transportation solution is electric cars, rather than public transit/bikes etc.

I don’t think that leftist suburbanism is an important political trend in Austin either. But there are a lot of mainstream left-of-center folks who are attached to the suburban model of development and transportation. When they think of reducing carbon emissions, they focus on electric cars, rather than getting people out of cars altogether. Indeed, I recently heard an anecdote about an elected official who got up at a recent meeting of the Travis County Dems to say that the party’s superb performance in suburban areas in November shows the benefits of sprawl. If you don’t understand that reasoning, I can assure you, you’re not alone.