Austin has a particularly robust taco market that generates God knows how much sales tax revenue for city government. But is the city really providing enough support for Austin’s trademark cuisine?

Here’s a novel idea: Why don’t we exempt tacos from the sales tax and instead implement a special taco tax? The revenue from this special taco tax would not be allowed to be used for typical city services such as police, fire, parks, or social programs. Instead, all of the money would go into a special fund dedicated to promoting the growth of the taco industry.

For instance, we could use the money to establish the first ever national taco museum. Or if that’s already taken we could surely do the first ever breakfast taco museum. We could pay for signage that directs visitors and residents alike to various taco locations. The city could set up taco walking/biking/running tours and organize taco-eating competitions. We could pay to send various taco businesses to national and international culinary festivals and to appear on cooking shows.

At this point you may be wondering if I’m serious. Of course I’m not. The idea is ludicrous.

And yet replace “taco” with “hotel” and you’re looking at the situation in Austin and every other city in the Lone Star State. This is the deal the hotel industry has convinced the state of Texas and municipal governments to buy into. Hence the push to expand the Convention Center.

Are hotels a public good?
The whole premise of the hotel occupancy tax is that a city’s hotel industry is a public good that deserves government protection. Whereas other businesses are subject to a sales tax that flows into the city’s general fund, hotels are subject to a different tax that (for the most part) can only be used, per state law, on things that benefit the convention and lodging industry. No, it’s not just about tourism. The law specifically calls for the great majority of the revenue to be committed to spending that will benefit hotels.

Businesses often claim they just want government off their backs, but in this case hotels would prefer to pay higher taxes as long as they can dictate how those taxes are spent. They know there are certain things they cannot accomplish individually. It’s much easier to give their money to the government and have it build them a Convention Center than to figure out a way to finance one on their own and deal with the risk.

So, is the hotel industry a public good that needs government support? No. It doesn’t require government support any more than the taco industry. That argument might be compelling for a small, economically-depressed town (but perhaps in a beautiful area) that believes it could jump-start its tourism economy if only there were a hotel or two within 50 miles. That’s obviously not the case in Austin. We have a booming tourism industry, most of which has nothing to do with the things we spend the hotel occupancy tax revenue on.

What about the economic benefits?
So now we come to the Convention Center. The hotel industry desires –– and City Council has already delivered –– an increase in the hotel occupancy tax to fund a new Convention Center that will likely cost north of $1 billion.

The hotel industry and the dedicated city staff supported by HOT revenue (Visit Austin) argue this is a win-win-win situation for Austin. If we get a bigger, better Convention Center, we will attract bigger conventions to town and therefore more hotel bookings, more restaurant spending etc etc.

The problem is, even the city-commissioned study that endorsed the concept didn’t offer compelling data in support of the idea. It flatly stated that the tax revenue generated from the increased Convention Center business would never make up for the cost.

Below is the chart outlining what the study views as three plausible scenarios. The base case is sort of the middle of the road, and the upside and downside case are pretty self-explanatory. 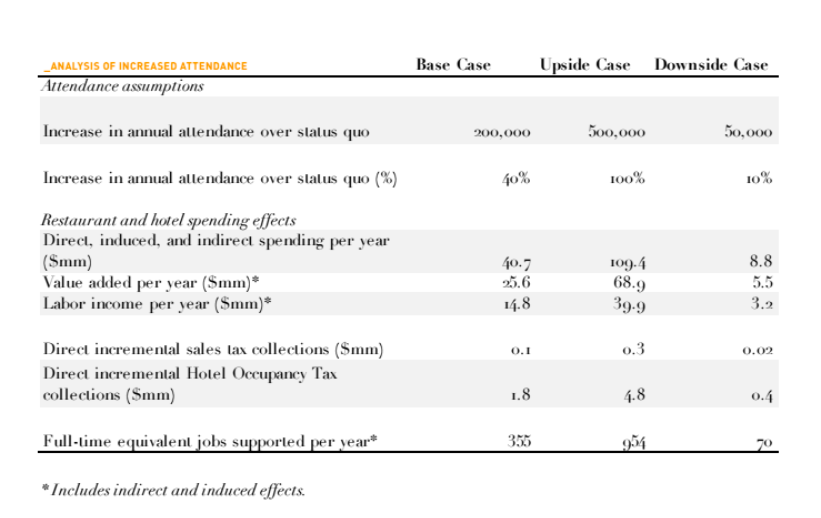 I can’t vouch for the methodology used here, but I’ll say that even the upside case hardly looks like a home run. In that scenario, the more than $1 billion we spend on the Convention Center supports less than 1,000 full-time jobs, so that’s more than $1 million per job.

Yes, government investment usually produces economic benefits. I’m totally cool with Keynesian economics. But we could just as easily derive that benefit from investment in things that the general public uses: libraries, parks, museums, infrastructure, etc. We pay people to build them. We pay city employees to staff them. All of that money circulates back into the local economy, probably much more effectively than spending on international hotel chains.

Finally, the evidence that Convention Centers are a powerful driver of local economies is exceedingly thin. There’s no evidence that I’ve seen that they provide a more effective economic stimulus than a traditional government project. However, there have been decades of Convention Center expansions not living up to the expectations created by the hotel industry and convention consultants.

But what about the homeless? And the arts?
Alas, we arrive at the only reason I can fathom supporting the Convention Center expansion.

You see, the downtown hotels have offered the city a deal. If the city goes ahead with the expansion, the downtown hotels will submit to a Tourism Public Improvement District where they will levy an additional 1-2% tax on hotel stays. They have agreed to dedicate a certain % of that to homelessness services, which, as you may have already noticed, we desperately need. Supposedly we’ll get $4 million for the homeless in the first year and eventually it will generate up to $10 million a year.

So everything that I’ve mentioned in this section actually serves a public good. But it’s beyond perverse that in order to get them we have to spend over $1 billion on something that provides very little public value.

Many urbanists, including Convention Center skeptics, have come around to the idea because Council has made clear the new CC will not be as godawful as the current one. It will hopefully engage more with the street –– perhaps with ground-level retail –– integrate some public space and not break up the street grid. This is great, but again, it probably doesn’t justify the cost.

But it’s state law!
A common refrain at City Hall is that, while Convention Centers aren’t particularly useful, it’s not like we have a lot of options for spending hotel tax revenue. It’s state law, after all.

Yes, I get it. But laws can change. And frankly, I’m having a hard time taking seriously the recurring claim from City Hall folks that the hotels will never allow the law to change. For one, have they even tried to change it?

No, Austin can’t do this alone. It will require the collaboration of other Texas cities, all of whom are also desperate for new sources of revenue to support basic public services. But there are people on both sides of the aisle, from the libertarian right to the progressive left, who would be eager to subject hotels to the same rules as everybody else.

It may take a few years to get the law changed, but if we move forward on the Convention expansion now, we’re foreclosing on future opportunities to put our money to better use.

This is just a small sample of what you get every weekday if you subscribe to the Austin Politics Newsletter. Sign up here to get daily breaking news and insider insights on local politics that you won’t get anywhere else in town.