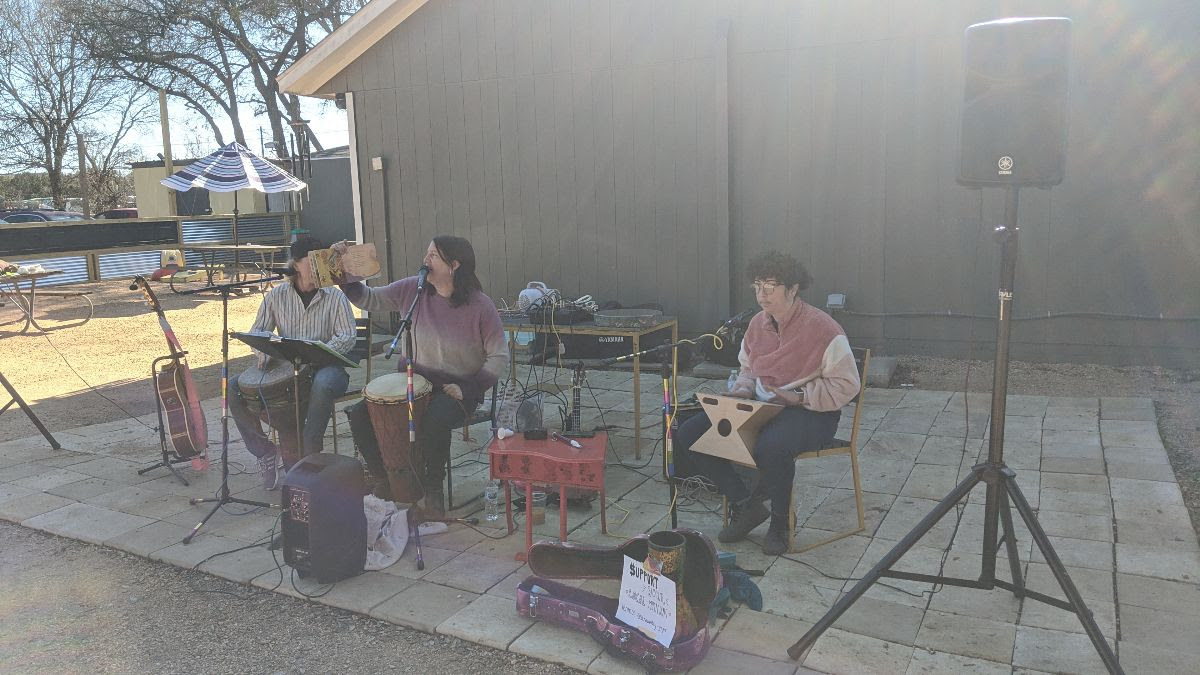 The Strawbiddy Yops regale babies, toddlers and their parents with storybook songs Saturday morning at the Hive in far south Austin. Certainly not the best photo I’ve ever taken, but you get the idea.

2nd draft shrinks transitions, reduces housing potential
To the credit of city staff, they haven’t hidden the fact that the second draft of the code, which was released Friday, will probably get us less new housing than the first. It’s still not clear exactly how much the total housing capacity was reduced by, but it wasn’t hard to notice the changes on the new zoning map.

The gentrification zone
A number of areas identified as “gentrifying” that in the first draft were zoned R4 (max 4 units, up to 8 units w/affordable bonus) were knocked down to R3 (max 3 units, no bonus).

The areas that were determined to be gentrified-beyond-hope retained R4. Generally a lot of the transitions south of E. 12th (E. Cesar Chavez, E. 7th Street, Rosewood) went down to R3, as well as corridors further east, while the corridors north of that (Manor, 38th 1/2) kept R4. MLK has R4 closer to downtown and R3 further east.

The same was true for areas in southeast and south Austin. Properties along E. Oltorf, in Montopolis and those surrounding S. 1st St south of Ben White got R3.

What’s the benefit of this? I’m having a hard time seeing it. We get less housing overall and in R3 there’s not even the opportunity of an affordable housing bonus.

Dialing back residential corridors
One of the other ways staff decreased capacity was by reducing or eliminating transition areas around corridors that were deemed “primarily residential.” This was one of the infamous amendments put forth from the temporary collaboration between the mayor and Alison Alter.

The result is that there are streets that for all intents and purposes are major transportation thoroughfares, such as Menchaca, W. 45th St, Exposition and Pleasant Valley that are not fulfilling their potential as transit corridors.

Some random changes
For instance, in my own neighborhood of Southwood, Redd St., which is sort of a neighborhood corridor, if such a term exists, was initially proposed to be upzoned entirely from single-family to R4. Now it’s all R2 again. Hmm. I wonder if a certain South Austin Council member might have had something to do with this.

Some improved site regs, but still a long way to go
Remember, the code is not just about zoning. That’s what most people focus on, but the theoretical right to build a billion units on a lot doesn’t mean much if there are other regulations (impervious cover limits, floor area limits, fees) that make that impossible. Here are a few of the big things that caught my eye.

Small improvements for duplexes
I’ve talked before about the way the current city code allows duplexes on single-family lots but strongly discourages them. The new draft improves the situation, but not nearly enough.

What’s not good is that a duplex would be limited to the same 0.4 floor-to-area ratio (FAR) as a single unit, which means the floor space can only take up 40% of the lot. There’s an exception for units under 1,300 sq ft –– so you can exceed the FAR limit if both units are smaller than that. That’s helpful, but the fact is that limiting the FAR is not simply preventing builders from building very big duplexes –– it’s also encouraging them to build monster single-family homes.

Some helpful FAR exemptions
In response to concerns raised by builders, staff reinstated a partial exemption for parking and attic spaces. That means that up to 200 feet of garage/car port space will not be counted toward the FAR max. The same will be true for up to 400 square feet of attic space.

An amendment by Casar proposed some changes to the program. It suggested easing size restrictions on units achieved through the bonus, increasing allowable impervious cover, exempting a preserved unit from counting against the FAR limit, and making units as young as 15 years old eligible for the program and exempting bonus units from parking requirements.

Staff was cool with all of that except reducing the age to 15. They recommend sticking with 30: “Available data indicates that 30 years is the point at which properties become market-rate affordable, which is consistent with one of the Incentive’s main objectives.”

Sure, but a 15-year-old house is a lot closer to 30 than a 0-year-old house. I don’t know if this makes a big difference. Are there many instances of units built in the 21st century that are already getting demoed? I’d be interested to hear from my readers in the real estate biz on this one.

There will be much more on the code tomorrow…

Large fire at homeless camp under frontage road: The Austin Fire Department is working to determine what caused a fire at a homeless camp in north Austin that stretches three football fields long under a frontage road. AFD responded to a large homeless encampment fire in the 1100 block of Anderson Lane around 9 a.m.

Terrible. This may likely underscore the danger of homelessness encampments, as well as the risk involved with pushing the homeless to camp in wooded areas.

Greg Abbott renews attacks on city homeless policies, citing stabbing:  The governor said Saturday he has a four-step solution to solve homelessness in Austin, but the city “doesn’t have the leadership to do this.”

Those steps included opening large shelters, providing mental health and drug addiction treatment, job training skills and focusing on long-term housing. He did not elaborate in his tweets on how the resources could be provided.

I’m going to go out on a limb and predict the elaboration will not be coming anytime soon. But I’d be happy if he proved me wrong.

Wendy Davis way ahead of Chip Roy in fundraising: Davis raised $910,000 in the fourth quarter, more than double Roy’s haul, marking the second quarter in a row that she has taken in more than him. She also pulled virtually even in cash on hand, with both reporting $1.2 million in reserves.

If this presidential election goes well for Dems (hardly a foregone conclusion), Roy is a goner