As Council inched towards the end of debate on the LDC Thursday evening, Alison Alter asked staff for an update on a question she’d asked earlier. If all of the missing-middle transition areas were limited to only two lots off the corridor, how much housing capacity would the city lose?

The answer was shocking: 400 units.

For a bit of context, the total additional housing capacity under the current code is about 135,000. Under the proposed code, it’s a little under 400,000.

The response from seemingly everyone watching, including those on both sides of the dais, was befuddlement. Seriously?

Later that night and the following day I was told by numerous insiders that staff was actually answering a far more specific question. There had been a misunderstanding.

However, Friday afternoon I talked to Annick Beaudet, the co-lead of the LDC revision team, who told me that the estimate was in fact an attempt to calculate the impact of reducing transitions to two lots citywide. She stressed that the estimate was very rough. It was not actually calculated by counting lots, but rather by limiting the transitions to 300 feet from the corridor. In many cases there are more than two lots within 300 feet.

How can this be?
When I posted this news on Twitter over the weekend, I was hoping some mapping geeks would jump at the opportunity to either disprove or confirm staff’s estimate. No takers so far. It still doesn’t make sense to me looking at the maps.

Let’s just look at this one section of Crestview, just west of N. Lamar. All of those dark yellow lots are currently single-family and are being proposed for R4. That means that the base entitlement is increasing from a duplex (based on lot size) to four units. If they take advantage of the affordable housing bonus, they can go to eight units. 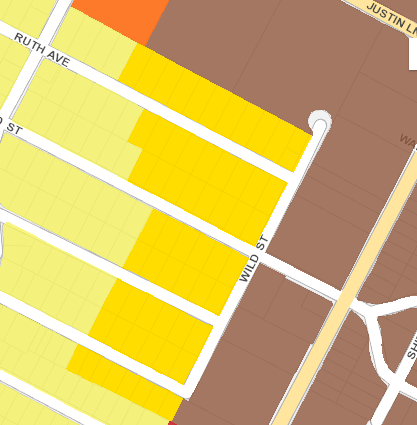 I counted 60 lots zoned for R4. Now, I don’t know exactly what would qualify as two lots off the corridor. The most conservative estimate would include anything that is within two lots of those large commercial (brown) properties that front Lamar and Justine Lane. If we use that methodology, there are 28 lots left.

Most of those 28 units probably only have a single unit, but under the current and new code they could all become duplexes and/or add an ADU. And some of them are eligible for the preservation incentive, which would give them the right to add two units on top of the existing unit.

That seems like a pretty big gap in capacity. Remember, I’m not saying that upzoning will actually result in 252 units. The actual yield will be far less. It’s very likely that few, if any, developers will take advantage of the affordable housing bonus.

That’s why staff’s calculation is based on what they call feasible capacity. According to staff, it “accounts for redevelopment potential of lots given zoning and market. Uses conservative estimates of build-out densities based on observed trends.”

It’s impossible to predict when homeowners will sell
There’s an additional complication when calculating the impact of missing middle zoning: most of the properties are owned by individual homeowners. It’s very, very hard to predict what they will do with their properties in the coming years. 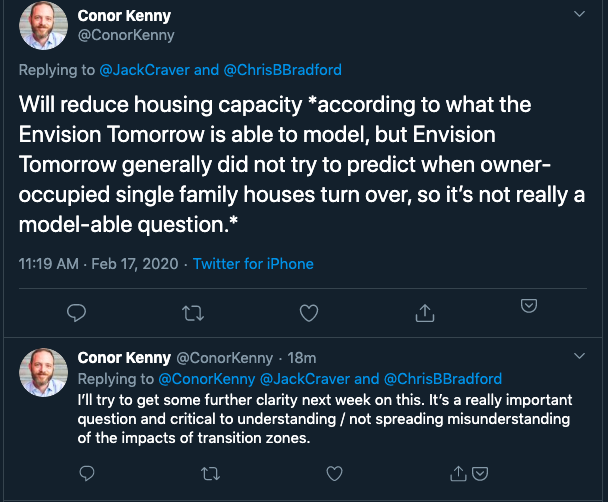 In the long-term, my guess is that there is much more than 400 units to be gained from extending transition areas beyond two lots.

In the near-term, the question is: How does this estimate impact the LDC revision? The preservationists, after months of bemoaning how the transition areas will transform neighborhoods, are now touting this number as evidence that the transitions don’t actually produce much housing so why bother with them?

Meanwhile, some reformers on Council, notably the mayor, are likely looking at that number and thinking that getting Tovo, Alter, Pool and Kitchen’s votes in exchange for 400 units would be a pretty good deal politically.

I would urge reformers to think carefully and get some more context before offering such a deal. I think there’s a very good chance that the staff estimate understates the impact.

This is just a small sample of what you get every weekday if you subscribe to the Austin Politics Newsletter. Sign up here to get daily breaking news and insider insights on local politics that you won’t get anywhere else in town.