This is an excerpt from the July 12 edition of the Austin Politics Newsletter. To get daily breaking news and analysis on city politics, click here to subscribe.

So on Friday City Manager Spencer Cronk released his proposed FY 2021-22 budget. As expected, he has proposed restoring the police department’s funding to its 2019 level to avoid “catastrophic” (his words) financial penalties from the state.

The ease with which the budget is being restored illustrates how overstated the whole “defunding” thing was last summer, at least in the near-term. There was only $23.3M in immediate cuts to APD’s budget, but roughly half of that came from canceling three police academy classes, a move that was partially reversed when Council restored funding for a new cadet class that kicked off at the beginning of June.

About half ($76M) of the $150M “cut” came from moving hundreds of civilian functions out of the police department: the 911 center, the forensics lab etc. And then there were $47M worth of APD programs that were put into the “regimagine” bucket — a sort of policy purgatory where they continued to exist as before but they were put on notice that they would eventually be “reimagined” in some undefined way. If the state had not intervened so quickly, perhaps those programs would have eventually been “reimagined,’ making it harder for Cronk to put the cat back in the bag.

If you look at the chart below, you’ll see that the number of civilian employees (circled in red) is going up by 315 over last year. That’s where the big change is. And you’ll also see below, in green, that the number of “sworn” APD positions (officers), is exactly the same as last year: 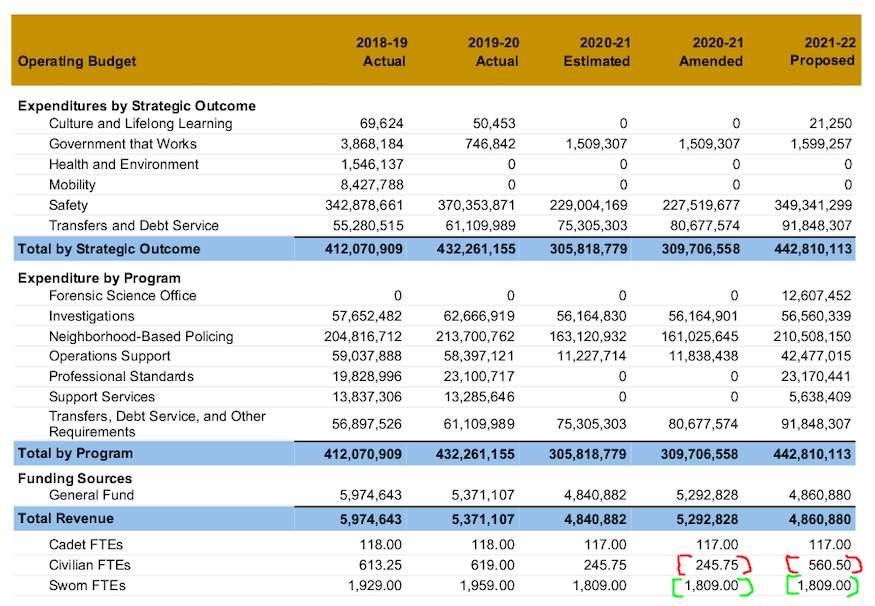 Remember, the number of funded positions ≠ the number of actual cops. Many of the positions are vacant due to retirements and resignations, which, contrary to what the police lobby says over and over again, have not meaningfully accelerated in the past year.

What is true is that the city’s police force is smaller than it has been in many years. According to this fun little KUT quiz that I think everyone should take, there were 1,083 police officers as of October of last year, which was roughly the same number as in 2016. This was partially due to Council’s suspension of the cadet classes but also due to a surge in retirements that began in 2018, two years before George Floyd’s killing.

Police union prez Ken Casaday tells me the association is “cautiously optimistic” about the budget but would like to fund a third cadet class, in addition to the two included in Cronk’s proposal. Casaday also would like to see some money for capital projects, including a new APD headquarters and a new substation in northwest Austin.

This is an excerpt from the July 12 edition of the Austin Politics Newsletter. To get daily breaking news and analysis on city politics, click here to subscribe.