This is an excerpt from the Aug. 11 edition of the Austin Politics Newsletter. To get daily breaking news and analysis on city politics, click here to subscribe.

Yesterday city budget officials released an estimate for what it will cost to pay for the police staffing mandate in the Save Austin Now proposition. It’s not pretty.

Remember, the SAN petition, which will be on the ballot in November, would require the city to employ two sworn police officers (civilian police employees don’t count) per 1,000 residents. It would also require the police department to maintain an average of 35% “community engagement” time for patrol officers. It would also require an additional 40 hours of annual in-house training and require the city to set up a program that offers additional financial incentives (of unspecified value) for officers who learn a second language, mentor cadets or who are awarded honorable conduct citations.

There is reason to believe that even if the referendum is approved, it will not be enforceable due to a provision of the city charter that forbids the use of referendums in “appropriating money or authorizing the levy of taxes.” But that’s a separate discussion…

The budget office’s analysis includes a low estimate and a high estimate, based on population growth and wage growth. Because obviously the cost of employing that many officers depends on how much we decide to pay them and how high we set the financial incentives. (Indeed, if this mandate is approved, I imagine the police union will have a much harder time negotiating pay increases)

The low estimate assumes over the next five years:

It also assumes that in order to have 2 officers per 1,000k residents employed at all times, the city would actually have to budget for 2.3/1000k. Why? Simply budgeting for the minimum required number of police officers would leave the city vulnerable to falling below the level as officers retire.

How seriously should we take this estimate?

I’m glad that the city is laying out all of the assumptions included in these estimates. As you can see, a lot of the assumptions are based on guessing what a future City Council might do: how high it will set wages and incentives and how many new facilities it deems necessary to accommodate the increased staff. My assumption is that if this referendum passes and is enforceable, Council will use whatever flexibility it has takes to reduce the cost, such as by making the incentives as low as possible or not authorizing new substations.

The population growth range is in line with what the city demographer has projected. Although the city population grew by more than 2% per year over the past decade, it has begun to slow down in recent years as more growth occurs outside of the city limits. Here is data from the past decade and the future projection: 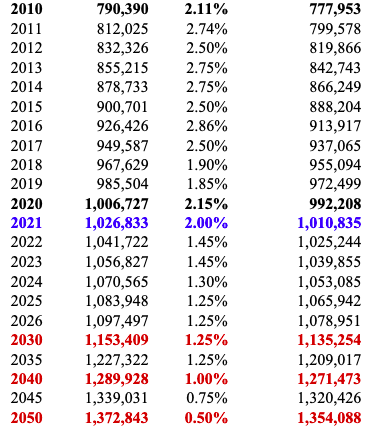 Another area of flexibility is in wages. The cops are entering the final year of their five-year union contract, which gave them a 1% wage hike in the first year and 2% hikes in the last four. The city could certainly choose to take a less generous line in next year’s negotiations. But the cost of living is also steadily increasing, which will make it harder to recruit and retain new officers without offering pay raises.

The bottom line: the city is already facing a structural deficit due to the 3.5% tax limit put in place by the legislature two years ago. This new mandate will turn a manageable structural deficit into a full-blown fiscal crisis requiring the city to make big cuts to other services — fire, EMS, parks — and/or ask voters to approve significant tax increases above the 3.5% rate:

Another thing that’s up in the air is how to define and measure “community engagement” time. Is SAN simply referring to “uncommitted” time when patrol officers aren’t responding to a call? APD does try to measure that, but as I’ve noted before, their efforts have produced some dubious data, with wild swings in reported “uncommitted time” from year to year. For instance, this was the data APD reported in 2015, which showed uncommitted time plummeting from 27% to 14% in just two years, before rising again: 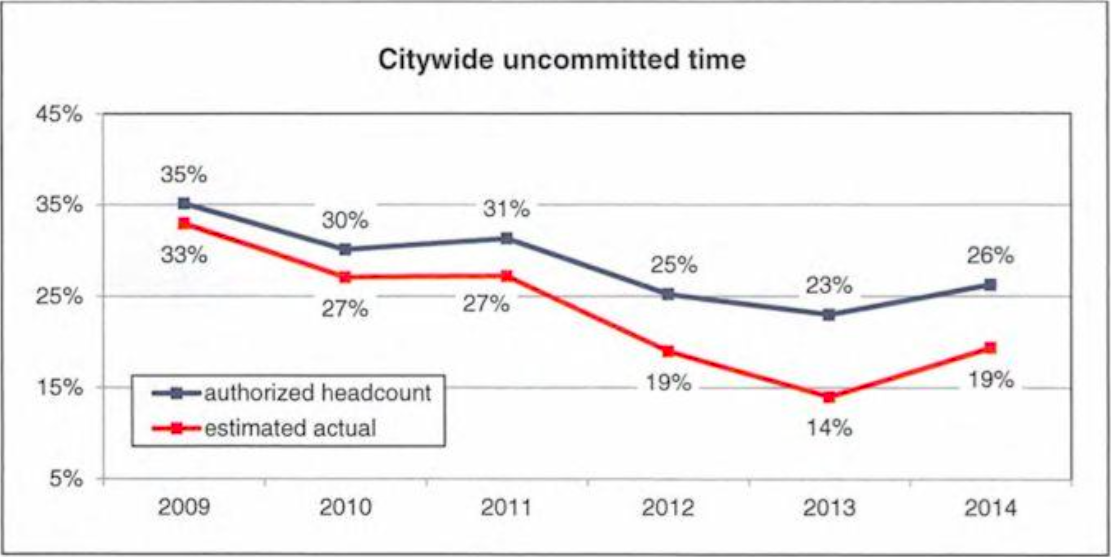 I asked APD if there were any requirements for how officers use uncommitted time, whether the department has in place any metrics for how they use it and if there is any explanation for the dramatic variations in reported spare time.

In a statement, I was told that uncommitted time is “simply time not on a call for service.” Furthermore:

Even measuring uncommitted time is not always simple, they conceded:

We calculate uncommitted time using an adopted formula which should be used the same way at all times. Having said that, it is not the same formula recommended by (the Matrix Report) which is why our target uncommitted time is lower than their recommendation. As well, there are issues with the process related to things like backup where time on call is often not recorded or not recorded well.

OK, so “community engagement” is not currently being measured but if and when it is measured, it will logically be a smaller subset of “uncommitted time.”

Well, the city manager clearly didn’t get this memo, since in his proposed budget this year, APD reported 31% “community engagement” time last year and is projecting the same level of community engagement for this year. This is despite what police leaders have repeatedly described as a severe staffing shortage:

In a statement, Save Austin Now ridiculed the idea that the city couldn’t afford its proposed staffing mandate, saying that it was “on track to achieve” that level “just two years ago.”

Well, something big changed in the last two years. The state legislature dramatically restricted the city’s ability to raise revenue. The city was ramping up APD staffing back when it was regularly raising taxes by more than the current 3.5% cap. Now the city needs voter approval to go above that.

Second, whether or not this was intentional, there’s a difference between budgeting for a certain number of officers and a mandate that that number be on the payroll at all times.

It makes no sense that our elected officials have chosen to allocate $515M to homelessness over the next three years and raise taxes again this year, while simultaneously arguing that returning to an adequate police staffing level is financially impossible in the face of rising crime. In a rapidly growing city with a $4.2 billion budget, we can afford public safety.

This statement has a number of sleights of hand that will unfortunately fool most media covering this issue. First, the $515M refers to a goal for the total amount spent from a variety of sources in the community: the city, the county, nonprofits, private philanthropy. Second, City Council is quite likely to approve a budget that does not result in a tax increase for the average homeowner, although it will on commercial property owners. Third, the city’s budget is technically $4.2 billion but most of that is tied up in enterprise departments funded by user fees, notably the city-owned electric and water utilities. The only source of potential funding for cops is the $1.2 billion general fund.

This is not Prop B

In contrast to Prop B, which many elected liberals remained silent on, I expect this petition to be universally opposed by the local Democratic/liberal establishment.

This puts at risk the public services that liberals cherish: parks, libraries, social programs. And it’s accompanied by a hefty price tag that will put pressure on them to raise taxes — something that nobody wants. What will be interesting to see is if there are some right-of-center voices that emerge in opposition.

This is an excerpt from the Aug. 11 edition of the Austin Politics Newsletter. To get daily breaking news and analysis on city politics, click here to subscribe.