This is an excerpt from the Oct. 19 edition of the Austin Politics Newsletter. To get daily breaking news and analysis on city politics, click here to subscribe.

The rumors turned out to be true. Yesterday Congressman Lloyd Doggett, who has represented parts of Austin since 1995, announced that he will run for reelection not in the 35th district that he currently represents, but in the newly-drawn 37th district that includes most of Austin west of I-35. The 37th finally gives Austin, which has been broken up and doled out to GOP districts for the past 20 years, dedicated representation in Congress.

Doggett is the obvious favorite to win the primary, which is the only race that matters, but it’s always worth keeping an eye out for an AOC-type challenge. In remarks given outside of Bryker Woods Elementary School yesterday, Doggett, 75, seemed to acknowledge that some are looking forward to a new generation of leadership, saying that he would not be a “forever congressman.”

And indeed, Patrick Svitek of the Texas Tribune noted that Julie Oliver, who has run unsuccessfully for Congress in the past two cycles, appears to be preparing to challenge Doggett. Her website:

So that should be interesting!

But back to Casar…

This morning, Greg Casar announced that he will “likely” run for the 35th district Doggett is vacating. He unveiled an exploratory committee that includes dozens of local elected officials and activists.

The 35th barely changed in the redistricting process. It is still a majority-Latino, solidly Democratic district that includes a big chunk of eastern Travis County and then snakes down south to take a big chunk out of the San Antonio area.

Casar’s home in North Loop is located just east of the 35th district. One thing that might surprise you is that you don’t actually have to live in your district to be a candidate. The Constitution says only that you have to be a resident of the state that your district is in.

At least one other likely candidate for the 35th has emerged: State Rep. Eddie Rodriguez, whose legislative district includes most of Austin’s urban core. There may very well be candidates from the San Antonio area who emerge as well. Veteran Dem insider Harold Cook commented on Twitter that an Austin-area candidate would likely have the advantage: 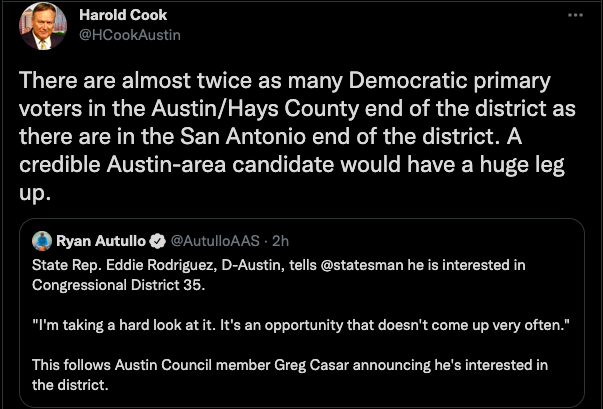 Here was the statement Casar included in this morning’s press release announcing the exploratory committee:

“Every Texan deserves a fair wage, housing they can afford, a stable retirement, and a functional power grid,” Greg Casar said. “But working families are struggling because people like Gov. Abbott are looking out for themselves, instead of everyone else.

“We can win better jobs, a clean planet, and an end to the Republicans’ discriminatory laws. We can make the world a better place if we fight for it. If we organize for it. That’s why I’m considering running for Congress – to fight for working class and everyday Texans.”

The five accomplishments he highlighted:

As Casar fans and critics will note, there is no mention of his role in the two most polarizing issues in city politics: homelessness and the police budget. The extent to which those two issues define his legacy will be largely determined by the outcome of Prop A next month.

It also neglects what in my view are his greatest accomplishments on Council: the passage of the record-smashing $250M affordable housing bond in 2018 and the addition of $300M in housing funds that voters approved as part of Project Connect last year. Casar pushed for the 2018 bond to be much larger than anyone at City Hall thought was politically feasible, but it passed overwhelmingly. That laid the groundwork for another huge investment via Project Connect.

“Affordability unlocked,” the code amendment that exempts affordable housing developments from a bunch of very stupid city regulations, has also been a success.

BTW: “Workers, wages and weed” happens to be the messaging that Oliver, the likely Doggett challenger, has touted as a winning message for progressives.

Now for the important question: Who’s running for Council?

If Casar officially declares his candidacy for Congress, he will have to give up his Council seat and he will remain in office until a successor wins a special election. Assuming declares in the coming months, the special election will most likely coincide with the March 1 primary.

One likely candidate is Jose “Chito” Vela, an immigration/criminal defense attorney who ran unsuccessfully in 2018 for the state house seat that Sheryl Cole now represents. Vela also served as Casar’s appointee to the Planning Commission: he is politically progressive and a devout urbanist in favor of new housing and public transit.

There’s also been some talk about Stephanie Gharakhanian, who is currently a trustee on the ACC board and also has close ties to Casar through the Workers Defense Project, the labor group where they both worked before he was elected to Council. I am not yet familiar with her views on housing and land development.

This is an excerpt from the Oct. 19 edition of the Austin Politics Newsletter. To get daily breaking news and analysis on city politics, click here to subscribe.