The Greater Austin Crime Commission has released its long-anticipated machine-learning study on APD patrol staffing. The study was done by Giovanni Circo, a professor of criminal justice at the University of New Haven in Connecticut.

The GACC is a nonprofit that has traditionally had close ties to APD leadership and advocates for increased police staffing. The group is overseen by a board of five dozen people (46 men, 13 women) largely plucked from Austin’s business elite. It’s run by executive director Cary Roberts, a veteran lobbyist. In sharp contrast to the police union, the GACC is diplomatic in its criticisms of City Council and has tried to maintain a seat at the public safety table. Notably, it did not take a position on Prop A.

How long should it take the cops to respond?

The study focuses on the highest priority calls: 0 and 1. The model linked length of response time to certain “outcomes” –– it identifies arresting a suspect or recovering a firearm as two such outcomes.

The study says that in order for the police to respond to high-priority calls quickly enough, the city should add 108 patrol positions, bringing the total to 882. The proposed 882 positions will likely translate to about 730 actual patrol officers, which is about 100 more officers than are currently working in patrol.

Where do you put them?

The study highlights major differences between the city’s nine patrol sectors. In recent years calls for service in the downtown George sector have sharply declined, while calls have significantly risen in the northeast Edward sector. 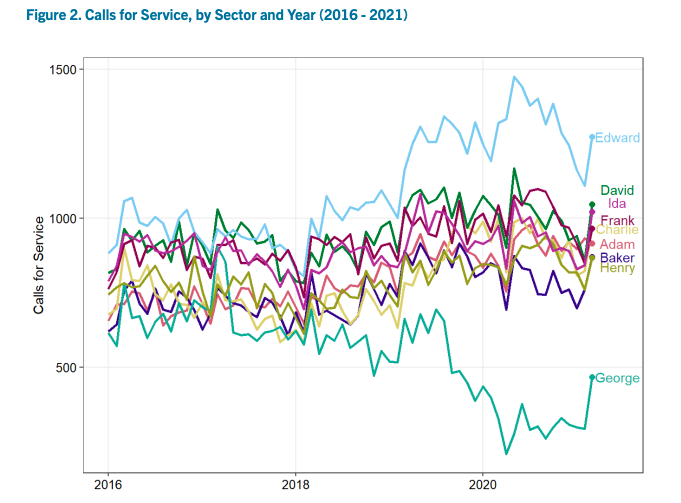 Nevertheless, “George maintained the highest level of staffing while Edward remained mostly unchanged, or even decreased slightly,” says the report. “This is despite large declines in priority 0 and priority 1 calls in George and large increases in Edward.” 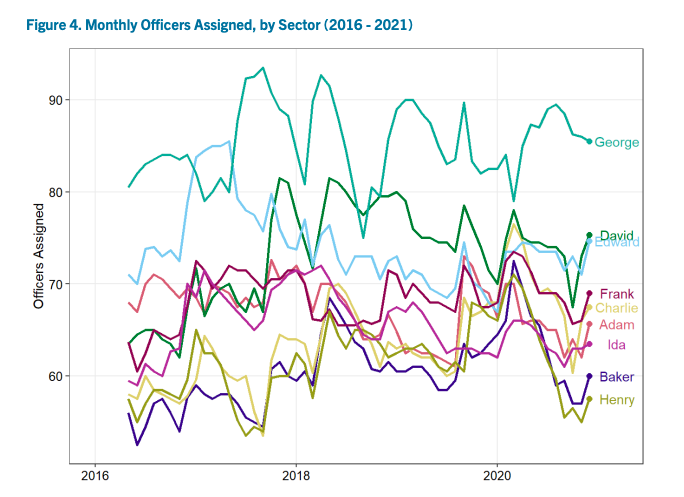 On its face, that staffing disparity seems indefensible. Why would the sector with the fewest calls have the most officers?

Alas, one officer tells me, downtown is fundamentally different from the other sectors. Calls for service don’t reflect the main problem that cops are dealing with there, notably the frequent fights outside of bars. It takes a lot of cops to deal with numerous drunk people fighting. Minor arguments that escalate into fist fights are at risk of further escalating into shootings if cops aren’t able to respond immediately.

This cop directed me to a YouTube channel, TXStreetfights TV, that collects videos of brawls on Dirty 6th. It is a fascinating glimpse of human depravity.

Patrol is just one part of a police department

Whereas the ongoing political debate over police staffing over the past year has focused on overall police staffing, this study focused solely on patrol officers. It did not comment on how many cops are needed to staff investigation units, such as homicide and sex crimes.

In the coming weeks, it’s up to journalists and city officials to scrutinize the assumptions built into the study. Trusty Twitter wonk Julio Gonzalez Altamirano says we need “the source data, wrangled data, and R code be made public.” R code is the programming language used in the machine learning model.

JGA also questions the goals articulated by the study. The outcomes cited in the study –– recovering firearms, arresting suspects –– may not necessarily translate to reduced crime. Or at least they may not be the most cost-effective way of reducing crime.

APD Chief Data Office Jonathan Kringen tells me that he believes that all of the data will eventually be made public but that there are copyright issues to navigate. Circo, the researcher, shares the intellectual property with the university.

“It does have market value,” says Kringen.

Circo plans to submit the study to peer review and the code will likely not be available before that process is complete, he said. It’s not clear how long that will take.

This is an excerpt from the Jan. 11 edition of the Austin Politics Newsletter. To get daily breaking news and analysis on city politics, click here to subscribe.