In response to ongoing criticism of its planned expansion of I-35 through Central Austin, TxDOT has unveiled an updated proposal. Some of its critics say it’s an improvement, even if they’re still pushing to stop the project entirely.

There would be a median separating the north and southbound lanes: 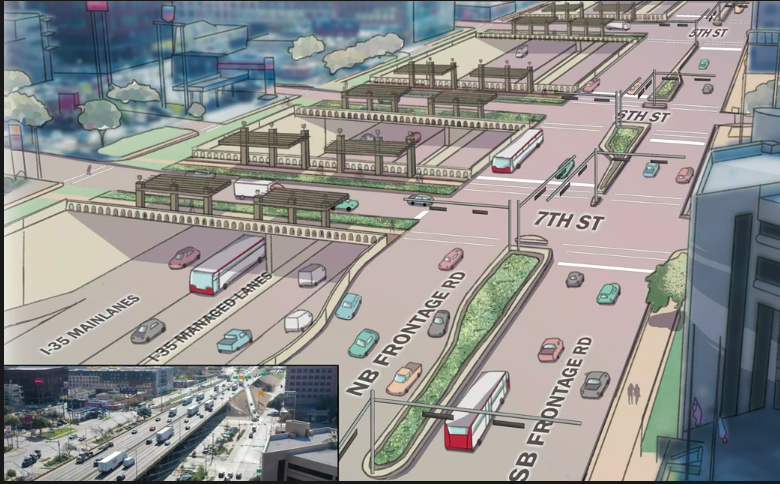 These changes could offer two benefits. First, it’s nice not to have frontage roads on one side.

Second, where there are frontage roads, they could become something more akin to a traditional urban boulevard. Having traffic move in both directions could slow things down, at least if it’s designed correctly.

Eliminating frontage roads from one side could enhance access to the parks that might be built on top of some parts of the highway if the city can come up with the necessary funds. The city has said that there are a number of potential opportunities for caps that would cover the highway, including one that would extend all the way from Cesar Chavez to 8th St.

For instance, here is a rendering of the cap concept from a city presentation in. December. This one does not incorporate the frontage road changes that TxDOT has since proposed.

As you can imagine, getting rid of the frontage roads on one side would make the parks much more attractive and accessible.

This is certainly a much nicer concept than what TxDOT originally proposed but it’s still going to induce additional vehicle travel, it falls far short of reconnecting the street grid and it doesn’t open up any new land to tax-generating development.

The concept proposed by Reconnect Austin appears to have lost steam. The Reconnect concept would be to cap the entire highway, build a true urban boulevard on top and to allow the land currently devoted to frontage roads to be developed.

It’s not clear whether this is just laziness or a lack of imagination from Austin’s political class. There is a generational project that offers us an opportunity to do something that is far superior environmentally, culturally and economically and it appears we’re settling for something much worse and it’s not clear why.

This is an excerpt from the Jan. 27 edition of the Austin Politics Newsletter. To get daily breaking news and analysis on city politics, click here to subscribe.