This is a free sample of the Austin Politics Newsletter from June 6, 2022. To get DAILY insights on city politics, click here to subscribe to the newsletter.

Last week during a meeting of the Council Housing Committee, Council Member Ann Kitchen thrice made a point of declaring Austin’s 12-year-old Vertical Mixed Use density bonus program a success.

The program was started in 2010 as a way to incentivize things that everybody says they want: affordable housing and walkable retail. The deal was that if a developer provided this stuff, the city would offer them an unlimited floor-to-area ratio and a big reduction in required parking, among other things.

The program was then offered to neighborhood associations as something they could choose to allow on their corridors. Some did, some didn’t. Properties that received VMU zoning retained their previous “base” zoning as well. So if the owner wants to redevelop the property, they can either take the VMU deal –– get the relaxed regs in exchange for the affordable housing –– or develop under the rules set by the base zoning.

According to a recent presentation by the Housing Department, there are 818 properties in the city with VMU zoning.

The figure that got a lot of attention last week was “34%.” As city planner Sam Tedford explained during the housing committee meeting, of the properties with VMU zoning that have redeveloped, only 34% of them actually took part in program. The other two-thirds just developed under their base zoning. At best that means that we got an apartment building without any affordable housing. But in many instances it means we got a gas station or a storage facility.

But that figure actually understates VMU’s failure. The number we should be talking about is 3.5%. That’s the percentage of VMU-zoned properties that have actually developed into VMU projects in the past 12 years: 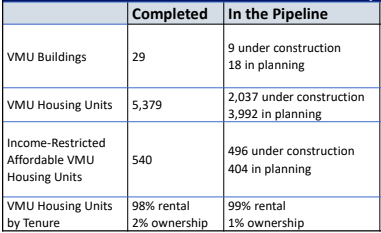 These figures support what people in real estate have been saying for years: VMU is rarely a good enough deal to incentivize redevelopment because most corridor properties are sharply constrained by compatibility standards that limit building height.

So, back to the original question: Has VMU been a success? It depends what your priorities are.

But there are plenty of people in Austin, including at least four on City Council, who either do not believe any of those things or believe they are less important than maintaining a certain character or sense of stability in nearby single-family neighborhoods.

For those who feel this way, VMU is a success. It represents the “balance” they believe the city must strike between growth and preservation. They are not against new housing. They just don’t want too much too quickly.

You have to keep this definition of success in mind when evaluating Kitchen’s proposal for a new tier of the VMU program, VMU2, which would offer developers an additional 30 feet of height in exchange for more affordable housing. Based on a cursory review of market conditions, housing staff recommended requiring a certain percentage of income-restricted units. But Kitchen, based on nothing besides a belief that “it’s important for us to get affordable housing,” has proposed increasing the affordability requirement.

The outcome is predictable and reflects what happened with most of the city’s density bonus programs. Council approves a new program, touts its strong affordability requirements and then no projects participate in it and we get no affordable housing. But at least we stood up to those greedy developers!

This is a free sample of the Austin Politics Newsletter from June 6, 2022. To get DAILY insights on city politics, click here to subscribe to the newsletter.